The sun comes out from the sea in a bright red summer sunrise behind the Ahlbeck pier. At this time, when everything is still quiet and the new day is stretching carefully its bright and sunny tentacles, the white elegance of the Grande Dame appears most wonderful. It looks glamorous and it stays with its simplicity in the transition area between day and night, between land and sea.

The Ahlbeck pier, built in 1898, is the oldest preserved pier of this kind in Germany. Despite its age it is probably the most wanted Photo Model on the island. It’s already been a hidden star in many movies. Even Vicco von Bülow, alias Loriot, fell in love with it at the first sight. He was so rapturous about it, that he not only gave it back its originally white painting (in GDR times it was brown), but he also immortalized it in one of his cult classics, “Pappa ante portas”.

It seems to be an inner urge of every single person, who comes to Ahlbeck, to go immediately on its wooden planking and from here to the Baltic Sea. Take a deep breath of the salty air, let the sea wind blow over your head, watch the massive sea waves – that’s pure life. That’s life at the sea. The way back from the pier leads through a wide square. The Art Nouveau clock in its middle is like a relic from former times, which takes the observer away from his own times. An enthusiastic bather gave it once to the resort as a gift.

The promenade, with its many small cafes and bistros, offers many leisure opportunities. You can still hear the swoosh of the Baltic Sea, and you can still behold the wonderful buildings of the Seaside Resort’s architecture. The hotels and the pensions have witnessed the the golden times, when children were romping on the sandy beach between the striped changing tents and when guests from the Berlin working class quarters were washing off their everyday worries by taking warm baths in large bathtubs, filled up with sea water. The rush of people on the promenade was colourful and full of life. And still today it looks exactly the same. When there are concerts in the bandstand, or when you can admire the breathtaking view from the Ferris Wheel during the Ahlbeck Summer Party.

And then there’s also the old Ahlbeck. The one, that existed also before the bathing culture times began. The houses’ roofs are still covered with thatch here. The former fishers’ huts seem small and quaint. One of the oldest buildings of the resort is situated here and may even be visited by tourists. It harbours the Köpp galery.

It doesn’t matter if you walk along Stresemann, Bismarck, Knights, Goethe or Kaiser Street – the beautiful villas and buildings of the Seaside Resort architecture are an inseparable part of Ahlbeck as much as the freshly caught and smoked fish, which you can eat in the middle of the dunes. All these things make a mix of the Past and of the Present and they become an incomparable flair. 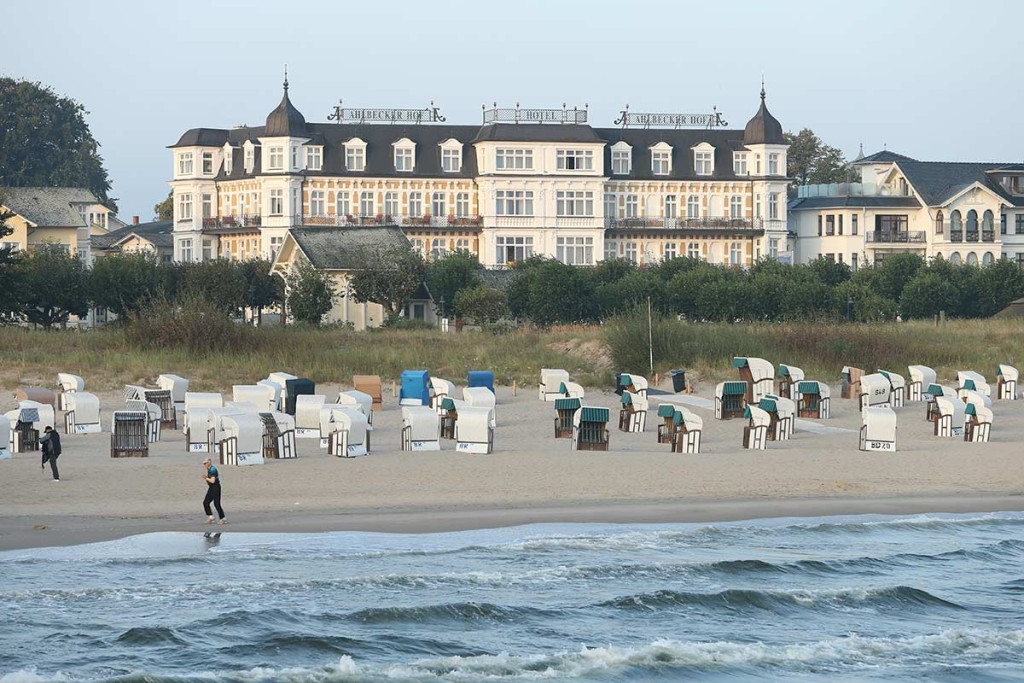 The seaside Village of Ahlbeck shines with luxurious villas and an impressive promenade and the island’s famous, historical spa architecture. It is the perfect place to be – spending unforgettable holidays at the luxury 5 star Grandhotel SEETELHOTEL Ahlbecker Hof – at the opposite of the historic pier – pampers its guests with a wide spectrum of hotel and dining services. For unique days the SEETELHOTEL 4-star Ostseehotel Ahlbeck is recommended with its rooms and residence located at the promenade and the Baltic Sea.

We use cookies to ensure that we give you the best experience on our website. If you continue to use this site we will assume that you are happy with it.Ok